Processing time after the Heart wall
and emotion code session:

It is not unusual for people to feel a bit unsettled emotionally during this period of time.It’s very important to remember that you may experience some emotional sensitivity from processing the release of a trapped emotion. Let others whom you work on know about this possibility in advance, so if it actually occurs, it is expected. If some noticeable processing symptoms, such as crying or vivid dreams, do occur and you haven’t told them that they might experience these things, they may end up thinking that the release of their trapped emotion has made them worse, not better.

If you felt the emotion deeply or thoroughly before it became trapped, you will likely feel lighter and freer, and not experience processing symptoms after it is released. If you denied the emotion soon after it was created, and either felt it only a tiny bit or not at all, you may be more likely to experience echoes of it as your body and subconscious mind work to let go of all that unprocessed energy. Either way, processing symptoms don’t last long and are generally much less intense than the original emotional experience. And the freedom on the other side is worth it!

Some patient needs Negative Emotion chart. Here is the list of trapped emotions. 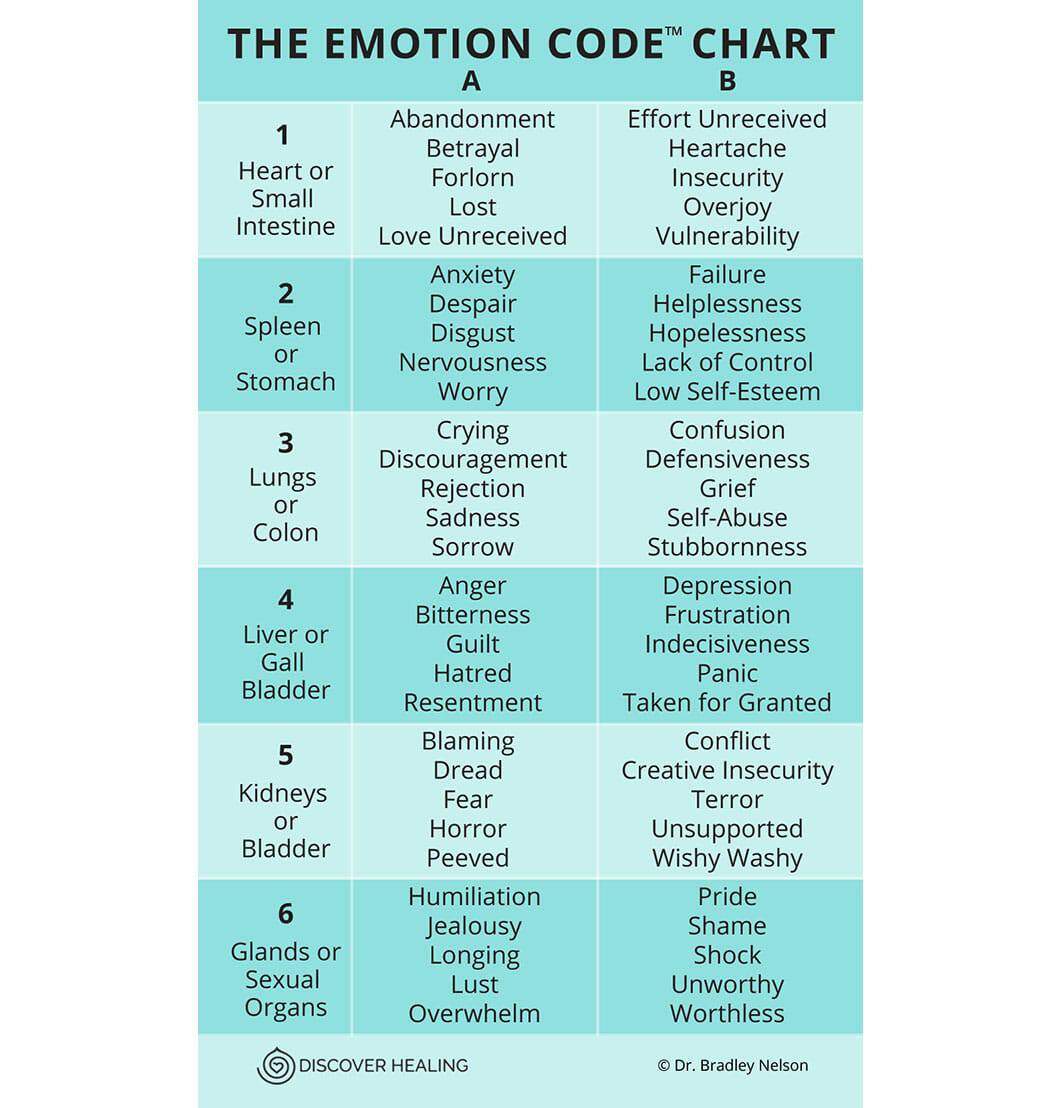 Some patient needs Negative Emotion definition. Here is the list of all trapped emotions with definition.

Anger:
A strong displeasure and belligerence aroused by a real or supposed wrong; wrath. Anger is often used as a cover-up or form of denial for emotions of hurt or fear.

Anxiety:
A generalized feeling of uneasiness and foreboding; a fear of the unknown; fear without a subject (e.g. she feels anxious and fearful all the time for no apparent reason).

Betrayal:
Betrayed is to have your trust broken, to be deserted or hurt by a trusted one. Betrayal of another is to be unfaithful in guarding or fulﬁlling a trust; to be disloyal or violate a conﬁdence, to desert someone who trusts you. Betrayal of the self is to break integrity; act against oneʼs morals, to abuse the body or soul.

Bitterness:
A harsh, disagreeable or cynical attitude. Being angry or resentful because of hurtful or unfair experiences.

Blaming:
Being Blamed is to be held responsible; accused; or held guilty for something. Blaming another is to hold responsible; accuse; ﬁnd fault with. Putting responsibility on someone or something else to avoid taking responsibility. This is a key emotion in creating a victim mentality and can cause a deterioration of personal power. Blaming the self is ﬁnding fault with oneself, which can lead to feelings of self-abuse, depression, etc.

Conﬂict:
Internal Conﬂict is a mental and emotional struggle within the self, arising from opposing demands or impulses. (e.g. He was feeling conﬂicted about whether or not to take the new job) External Conﬂict is to ﬁght; to disagree or be disagreeable; to struggle or battle against; to antagonize. Prolonged strife or struggle. (e.g. She and her ex-husband experience continual conﬂict about custody of their children). 1

Creative Insecurity:
Feeling unsafe or untrusting the self about the creation or development of anything- relationships, family, health, money, career and/or artistic endeavors. A feeling of insecurity that arises and blocks the creative process. (e.g. writerʼs block).

Crying:
The (often) involuntary act of expressing a strong emotion; a response to pain or suﬀering (emotional or physical). A response to or expression of helplessness. A physical sensation felt in the throat, chest and/or diaphragm. Often
becomes trapped when one does not allow him/herself to cry (i.e. suppressing this reaction or stuﬃng it down).

Defensiveness:
A state of resisting attack or protecting oneself; being sensitive to the threat of criticism or injury to one’s ego; being on guard against real or imagined threats to one’s person, physical and/or emotional.

Depression:
A state of being sad, gloomy, low in spirits, dejected. Often a secondary emotion caused by “anger turned inward” at the self and feelings of shame and guilt, etc.

Despair:
A complete loss of hope; misery; diﬃcult or unable to be helped or comforted. Discouragement: Feeling a lack of courage, hope or conﬁdence; disheartened, dispirited. Losing the nerve to try or attempt something.

Discouragement:
Feeling a lack of courage, hope or conﬁdence; disheartened, dispirited. Losing the nerve to try or attempt something.

Disgust: A feeling of loathing; when good taste or moral sense is oﬀended; a strong aversion. (e.g. She felt disgusted when the killer was acquitted).

Dread: Fear of something that is about to happen; apprehension as to something in the future, usually real but sometimes unknown. (e.g. He dreaded going to the high school reunion and facing the bullies who had tormented him).

Eﬀort Unreceived:
When one’s work, achievement, attempts or endeavors are not accepted or recognized; when one’s best eﬀort is not considered good enough; afeeling of being unappreciated. Not feeling approved of or validated.

Failure:
When one falls short of success or achievement in something expected, attempted, or desired; (e.g. The failure of a marriage or other relationship, being
ﬁred, bankruptcy, performing poorly in athletics, art, academics, etc.).

Fear:
A strongly distressing emotion aroused by impending danger, evil or pain; the threat may be real or imagined.

Frustration:
Exasperation; being stuck or unable to progress; feeling blocked from causing a change or achieving an objective or goal.

Grief:
Intense emotional suﬀering caused by loss, disaster, misfortune, etc.; an acute sorrow and deep sadness. A universal reaction to bereavement. Also can be
feeling harassed, vexed or exasperated (e.g. if someone gives you grief).

Guilt:
The feeling of having done wrong or committed an oﬀense. Feeling responsible for the harmful actions of another (e.g., abuse, parents’ divorce, death,
etc.) Often accompanied by feelings of depression, shame and self-abuse.

Hatred:
To loathe; despise; great dislike or aversion. Often comes as a result of “hurt love”. Often hatred is of a situation rather than a person (e.g. hatred of
anotherʼs behavior, unjust circumstances, etc.) Self-hatred creates destructive behaviors and illnesses.

Heartache:
Anguish and pain of the heart; distress usually as a result of diﬃculty or sadness in a relationship. Felt as a crushing or burning physical sensation in the
chest.

Helplessness:
Being unable to help oneself; being without the aid or protection of another. Having little strength or personal power. A common emotion for those
suﬀering from a “victim mentality”. Feeling unable to change oneʼs circumstances or
state.

Hopelessness:
Devoid of hope; having no expectation of good; having no remedy or cure; no prospect of change or improvement.

Horror:
A strong emotion of alarm, disgust, or outrage caused by something frightful or shocking (e.g. an event of extreme violence, cruelty, or macabre.)

Humiliation:
A painful loss of pride, dignity or self-respect; to feel mortiﬁed; embarrassed. Indecisiveness: An inability to make a decision; wavering back and
forth between one choice or another. Stems from distrust of the self or doubting the ability to make a good decision.
Insecurity: A lack of conﬁdence; self-conscious; shy. Feeling unsafe from danger or ridicule.

Jealousy:
Resentful and envious of someone’s success, achievements, or advantages. Having suspicious fears; fears of rivalry or unfaithfulness. Results from a fear of not being loved and/or from insecurity.

Lack of Control:
Lacking restraint or direction; unable to regulate or command; a feeling that someone or something else determines your course.

Longing:
To have a strong desire or craving; a yearning or pining; aching for; to miss someone or something; to want something you do not have (e.g. She longed for a diﬀerent life).

Lost:
Unable to see the correct or acceptable course; having no direction. Physically lost most often shows up from childhood- (e.g. being lost in the woods and canʼt ﬁnd the way home, etc.) Emotionally lost refers to a feeling of being unable to see what the right decision or direction, being unable to ﬁnd emotional stability (e.g. He felt lost after his wife died; She hasnʼt done anything with her life, she seems really
lost.)

Love Unreceived:
A feeling that love expressed is or has been rejected. Feeling unwanted, not cared for; not accepted; a lack of love where it is desired.

Low Self-Esteem:
A low appraisal of oneʼs own worth or value; feeling and focusing on oneʼs ﬂaws; holding a feeling of disrespect for the self; not conﬁdent; lack of self- love.

Nervousness:
Unnaturally or acutely uneasy or apprehensive; fearful; timid; to feel jumpy or on edge.

Overjoy:
Intense delight or elation which is too overpowering for the body; joy that it is a shock to the system.

Panic:
A sudden, overwhelming fear that produces hysterical behavior, unreasonably fearful thoughts or physical symptoms such as trembling and hyperventilation; a strong feeling of impending doom.

Pride:
An overly high esteeming of oneself for some real or imagined merit or superiority; vanity (an excessive desire to be noticed, praised, or approved); feeling better than others; haughty; non-teachable; has to be right; expects more credit than earned; or treats others with disdain or contempt. Having a healthy amount of pride (self-respect or self-esteem) is a good thing, and this type of pride usually doesnʼt show up as a trapped emotion (although it may show up if oneʼs healthy
pride is injured).

Resentment:
A feeling of displeasure or indignation at someone or something regarded as the cause of injury or insult; bitter for having been treated unfairly; unwilling to forgive. Often this emotion comes along with animosity (ill-will that displays itself in action, strong hostility or antagonism).

Self-Abuse:
Abusing the self emotionally includes negative self-talk (e.g. “Iʼm such an idiot.”), blaming the self, etc. Abusing the self physically includes mistreating the body by use of addictive substances; to not care for the body by lack of sleep, proper diet or nutrition; to work beyond what one can or should endure; to punish or tax oneself excessively. This abuse may help atone for “sins”, real or imagined, and usually is driven by anger. Illnesses can be forms of self-abuse (e.g., “I don’t deserve to be healed.”)

Shame:
A feeling of being wrong, defective or disreputable. The painful feeling of having done or experienced something dishonorable, improper or foolish; disgrace; humiliation; a cause for regret. The lowest vibration of all the emotions. Leads to guilt, depression and even suicide.

Shock:
A sudden or violent disturbance of the emotions or sensibilities; extreme surprise; to feel traumatized or stunned.

Taken for Granted:
Feels treated with careless indiﬀerence; not given thanks or for something accomplished, similar to ignored.

Unsupported:
A lack of support, help or encouragement; not provided for by another; not defended when help is needed; feeling the burden is too heavy to bear alone, etc.

Unworthy:
Not good enough; beneath the dignity of; not commendable or credible; undeserving; not valuable or suitable; unbecoming.

Wishy Washy:
Weak, spiritless; undecided irresolute; without strength of character. To lack conviction; without a backbone.

Worry:
Dwelling on diﬃculty or troubles; unease or anxiety about a situation or a person; extreme concern over potential problems; concern about a loved one in
possible distress.

Worthless:
Of no importance or value; without excellence of character, quality or esteem; serving no purpose.